This was one of the first sewing projects I did, based on the Gratitude Wrap from soulemama.com (1.6MB PDF). One friend calls it the Art Pack (which has an undeniable grandeur), but I tend toward Coloring Kit.  What can I say, I’m a fan of alliteration. 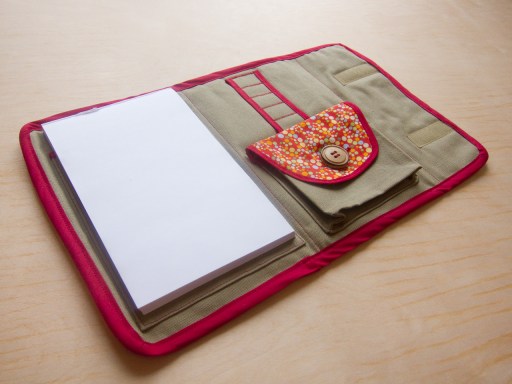 Instead of being for the storage of thank you notes and accessories, I wanted to make a pack my wife or I could throw in the diaper bag so we’d always have some entertainment for our then 18-month-old at restaurants.  They’re not all thoughtful enough to provide colorable place mats and crayons, and when they do the crayons are so often just broken nubs scarred with the teethmarks of a hundred children before.

I kept the tri-fold design, but the left pocket is enlarged to hold the cardboard backing for a 5×8 pad of paper.  The middle section has loops to hold small pencils and a pocket to hold crayons (loose or in the box), and the right-hand flap is just for closing the pack.  Closure is with Velcro, rather than a tie.

The one pictured is the third that I’ve finished.  Sorry there aren’t any in-process pics, but I was working on it late at night when there’s no good light, rushing to get it finished to give as a gift the next day.

The pictures should be enough to give you some ideas on the construction.  Let me know if you want a more detailed write-up, and I’ll try to do a step-by-step the next time I make one. 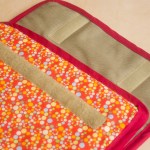 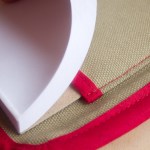 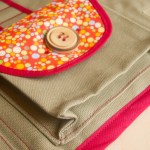 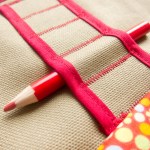 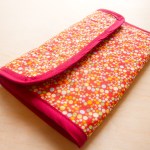