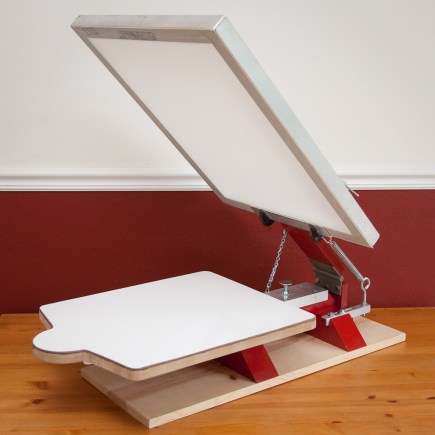 After doing some freezer paper printing* on a shirt for my son, I wanted to do some more intricate designs and maybe even sell some of them, but didn’t want to spend a lot of money buying a press. So what do I do instead? Spend a lot of money building a press!  Click the “continue reading” link for some details on the construction of my homemade screen printing press.

*cut a stencil in some freezer paper, iron it onto a shirt, dab on ink, pull up the stencil, set the ink with an iron.

Let’s start off with a couple of exploded views of the whole thing—minus elements like screws, bolts, and hinges—so you can see how it all fits together, then I’ll go into details on each component. Keep in mind that I made these drawings after I made the press. There weren’t any plans; the whole thing was put together by trial and error after reviewing a handful plans found online for ideas. And my goal in posting this isn’t to give anyone a clear set of “buy this, cut here, do this” plans, but to show how I made mine and to share what worked and what didn’t.

The frame is made from a four-foot length of 3×3 laminated wood. A dado is cut into each leg for the arm base piece to rest in, then they’re glued and screwed together.

Plans I found online used wood instead of aluminum for the platen arm, but I opted for the lighter weight and stability of the aluminum. I haven’t found a 2×4 yet that wouldn’t warp and twist if I even looked at it. I rounded the end of the aluminum arm on the band saw then smoothed it out on a belt sander so it wouldn’t snag the shirts being pulled over it. Four countersunk holes were drilled to fasten it to the wooden arm base with wood screws. 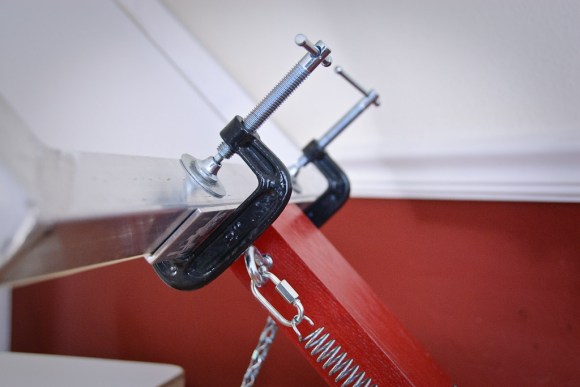 The screen bracket is made with c-clamps JB-Welded to ten inches of 1.5″ aluminum angle, which is then screwed into two 1×4 pieces of oak I laminated together.

On my first try at this sub-assembly, I cut the bottom half of the clamps off and JB-Welded them onto the vertical part of the angle with the thought that it would look cleaner and keep the bottom of the clamps from interfering with the platen when it was moved all the way back. What I didn’t know then, but do now, is that JB Weld has the shear strength of a toilet paper spitball on the bathroom wall. With the slightest pressure on the clamps, they popped right off. Whoops, off to buy a new set of clamps. 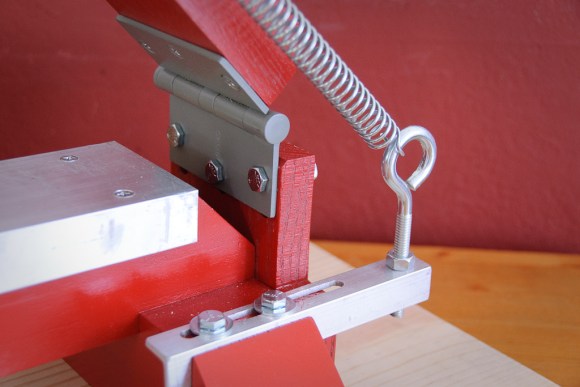 The hinge is a heavy duty door hinge bolted (more details on that soon) to a piece of 1×6 oak. That piece is screwed to the foot/arm unit.

The press has an adjustable spring system to lift the screen and hold it up while you’re changing shirts. The aluminum angle slides back and forth in a channel to adjust the tension, and is then tightened with bolts. The eye bolt holding the spring can be threaded in or out to adjust the vertical position of the spring and therefore how much down force it exerts. If you don’t have access to a milling machine to make a slot for adjustment, you could come close to the same functionality by drilling some equally spaced holes.

One of my goals in this project was to make as much adjustable as I could, since I really don’t know what I’m doing and have no idea what strength of spring would be best, or at what angle one piece or another would work. Figuring out how to make these adjustments is what took the most time in the project (learning to use a milling machine to cut the slot here, for example), but the alternative would probably be to make three or four before I found my ideal. 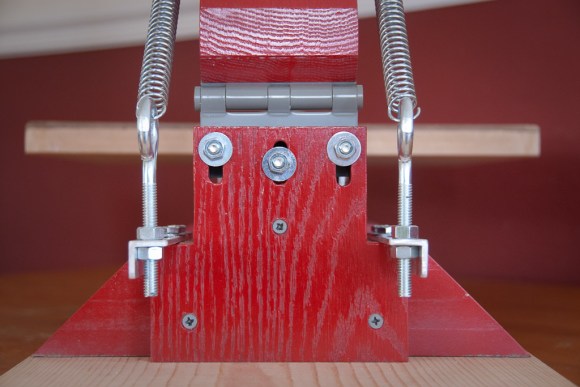 Moving around to the back of the press, you can see slots routed into the hinge support piece. These allow vertical adjustment for the off contact distance by letting the hinge slide up and down. There’s enough wiggle room to adjust for some tilt, too.

In another learning experience, I think I made three of this back piece before I got it right. For the first, I drilled a hole then cut a slot with a scroll saw. It wasn’t as smooth as I’d like, so in my second attempt I remembered the router. In that one, however, I had trouble with my router fence moving and the slots veering off path. The third screw-up was because I was frustrated by the second and didn’t measure correctly. When I put it away for the night and came back later, everything worked out. 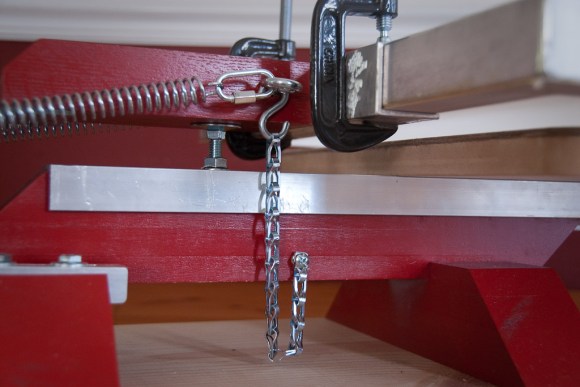 The other end of the spring attaches to an eye bolt screwed into a threaded insert. The removable link makes it possible to detach the spring so that tension can be taken off while the press is being stored. The threaded insert allows the bolt to rotate and maintain alignment with the spring. I also used threaded inserts on the bolts holding the sliding aluminum angle.

A chain with an s-hook on the end attaches to the shaft of the eye bolt and keeps the springs from pulling the screen arm too far back and dumping the ink and squeegee when putting a new shirt on the platen. In a case of project evolution springing from hardware store browsing, my original plan was to use 1/16-inch steel cable with loops crimped into the ends, but while I was waiting for a store employee to arrive to cut the cable length I needed, I saw the chain and realized its potential for adjustment versus the cable and its fixed length. To change the length of the chain and thus the angle of the raised arm, simply unscrew the bottom end from the threaded insert and put the bolt through a different link on the chain.

To make a stop for the arm, I drilled a hole through the aluminum arm and into the wooden base. A flange nut (because the flange of the nut has more surface area for attachment) JB-Welded over that hole provides threads for an elevator bolt to screw in and out and adjust the stop height. I didn’t even know what elevator bolts were before this project, but I discovered them while wandering through the hardware store looking for parts to use (or misuse). 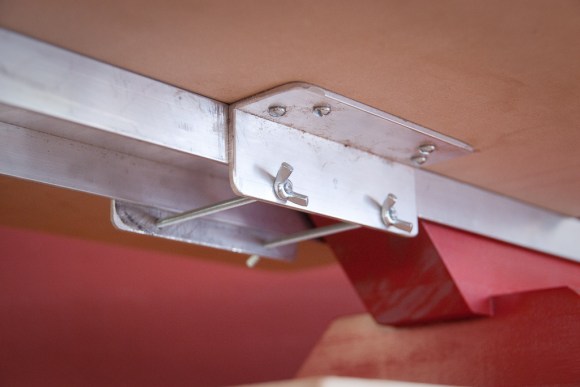 The platen was cut from a piece of MDF. I couldn’t find a small enough sheet of laminate for the top and didn’t want to pay for an entire counter’s worth, but I did have some coated hardboard from a dry-erase project. I cemented that to the top of the MDF, cut it to shape on the band saw, then rounded the edges with a router. The hardboard makes the whole platen thicker than it would be with laminate, but that’s what the hinge height adjustment mechanism is for!

I made the platen bracket from two small pieces of 1.5″ aluminum angle — the same stock that makes up the clamp for the screen frame. Each is screwed into the bottom of the platen with extra care taken that the screws wouldn’t poke through the top. Holes drilled on the vertical half of the angle pass threaded rods through, which then have wing nuts attached. Tightening the nuts clamps the platen to the arm, and loosening the nuts allows you to slide into the position you want.

Finally, here you can see the entire assembly minus the platen and screen frame. The 1×12 base I attached it to is sized to fit just right across this table, then be clamped down for extra stability. 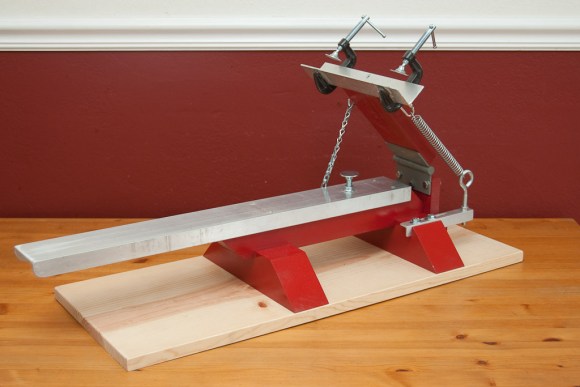 Primer and a can of red spray paint finished the whole thing off, covering all the patches and wood putty repairs of mis-drilled holes and errant cuts.

Now to build an exposure unit for the screens, then figure out how to actually print. I’ve got a feeling this hardware was the easy part.