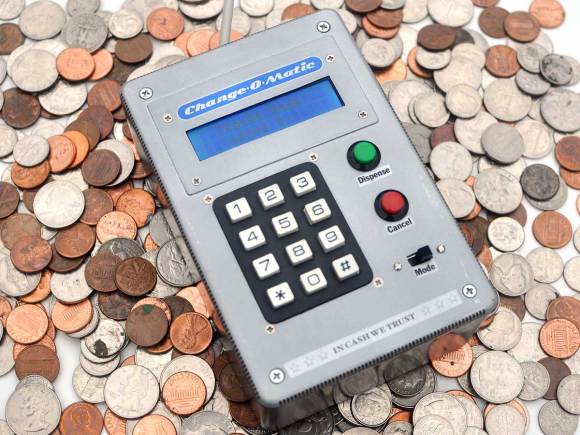 I picked up a used change dispensing machine on eBay, and after some trouble with the seller sending Australian coin canisters instead of US, I got it working. The model is a Telequip Transact 2+ CE. I can’t vouch for how well my system would work with other machines in their lineup, but I would assume some compatibility.

I found some basic documentation online about what connection settings it expected (9600 baud, 7 data, 1 stop bit, even parity), then with a serial monitoring program and a copy of the test & configuration software I was able to see what was being sent to and from the machine.

First to be sent are some control codes to reset the machine and tell it a change request is coming. Then the change amount is sent along with a checksum. I didn’t know how the checksum was calculated, but with only 99 options it was easy to record them all with the serial monitoring program and store them.

To drive it I used an Arduino, a serial shield, an LCD display, a numeric keypad, and some buttons and switches, and built it all into a Radio Shack project box that I milled some openings into. Paint and custom waterslide decals turned it into the Change-O-Matic. The outside looks a lot better than the mess I crammed inside. I plan on improving the design later with a custom PCB combining the microcontroller and serial driver, a serial port on the outside of the box instead of just a hole cut for the cord to pass through, and a rechargeable battery pack. I think I can get it down to about half the size. 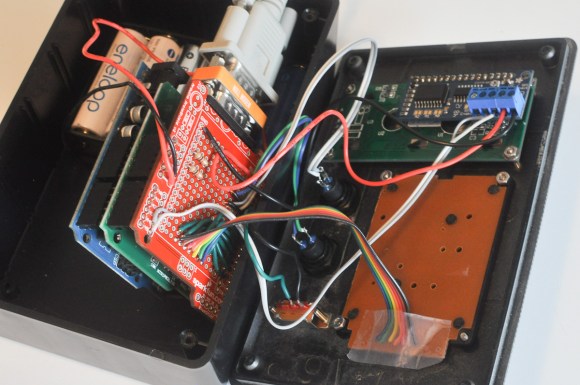 At the party everything worked as planned, and change was dispensed quickly and accurately all night long. I wasn’t able to find a middle-school dropout to run it, but a friend’s elementary student took the job instead, freeing me for more drinking and yelling.

Interestingly, there doesn’t seem to be any kind of authentication between the change machine and whatever’s sending it commands. If you plugged this into the dispenser at the grocery store I think it would start spitting out the change you asked for. Standing there for 5 suspicious minutes while the machine dispenses $100 in loose change is not a risk/reward ratio that many people would find worthwhile, though.

Here’s a quick video of it in action, though I use the term “action” quite loosely. You’ll find the code immediately below that.