I like to do a lot of my electronics & Arduino work on a laptop, either on the dining room table or spread out on the living room floor. Between the Arduino, the breadboard, and who-knows-how-many components, it’s a hassle to get all the pieces moved when project time is over.

I’ve seen acrylic plates for mounting a half-sized breadboard and an Arduino (here’s one at Adafruit & here’s one at Sparkfun), but they don’t appeal to me. First, I prefer using a full-size breadboard, and second, I don’t like the look of  the acrylic. Time to make my own. 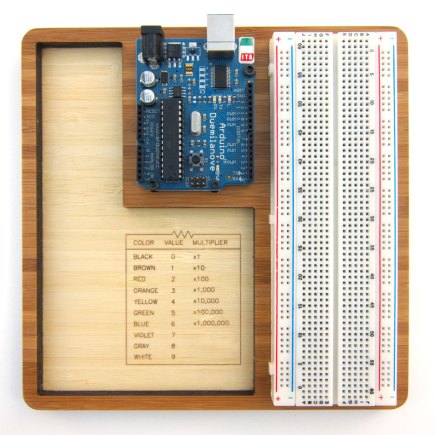 It’s laser cut from two pieces of bamboo plywood, sized to the P1 (smallest available) sheet at Ponoko. The thin sheet is the base, and the thick piece glued to the top holds the Arduino and a breadboard. A cut-out on the thick piece creates a tray for holding components.  I had room, so I engraved a resistor color code guide for handy reference*.

If you want to make it yourself, you can add it directly to your Ponoko account from my showroom, or you can download the zipped EPS files here. The file “protoboard_3plybamboo_p1.eps” is the top piece and should be made with 3-ply amber bamboo, and “protoboard_blondebamboo_p1.eps” is the bottom piece made with single-ply blonde bamboo. The total cost was around $15 + shipping. 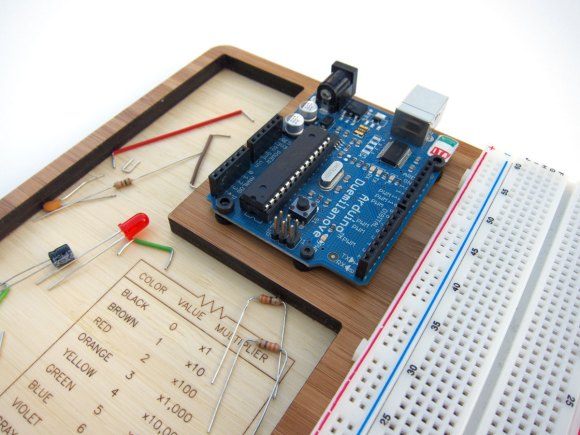 A stack of plastic washers on each bolt acts as a standoff to raise the Arduino off the wood, but this isn’t strictly necessary. On the back, the nuts are recessed. If you make your own, be sure that the bolt holes in the top sheet are centered in the nut holes on the bottom when you glue the two pieces together. Rubber feet in the corners keep it from sliding around. 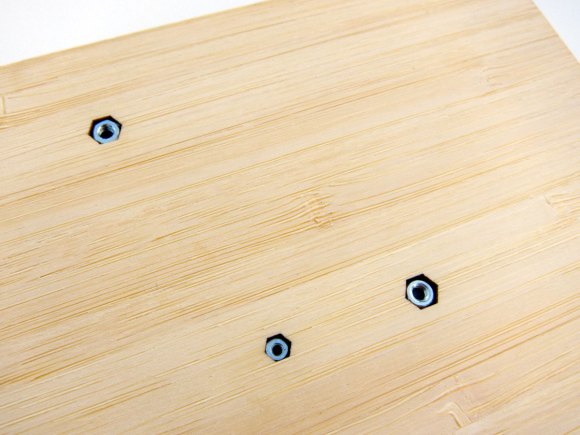 I sanded the charred edges off the outside, but left them on the inside (because I’m lazy and the belt sander couldn’t reach), and protected it all with a few coats of polyurethane.

*In my haste to get this made, I forgot to include the GOLD and SILVER on the resistor chart when I exported and uploaded. Whoops. I’ve re-done the file now to include those, and also to express the multiplier values in what I think is an easier to read format: xxK and x.xM, for example, instead of x1,000 and x100,000. This is what it looks like on the files linked/attached: 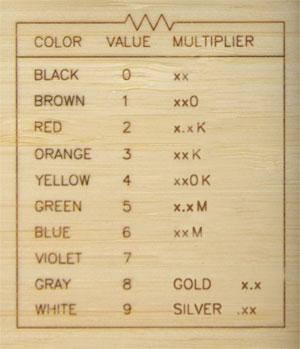 update 4/16/2013: reader Matt made another variation that you can download on Thingiverse. Very cool!