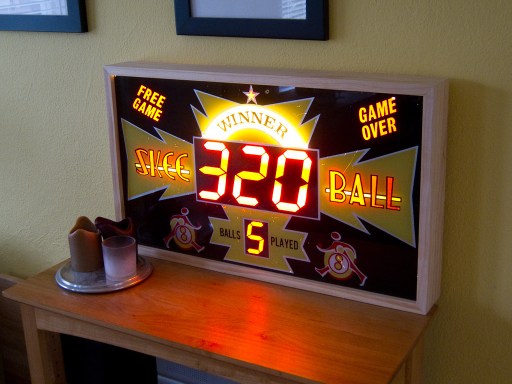 Over the course of a month, I ordered 3 different Skeeball marquees from eBay before I came to the realization that I wouldn’t find a perfect one so instead I’d have to retouch the printing, which is done on the back of a sheet of plexiglas.  Most of the problems were with scratches in the black section, so color matching wouldn’t be a big problem.  I spent a few evenings alternating between hunching over it with the paintbrush and holding it up to the light looking for the next scratch or pinhole to retouch, but I finally got everything filled (or so I thought). 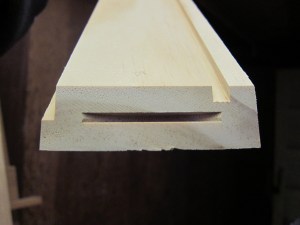 The profile of the frame, showing the notch for the backboard, the groove for the marquee, and the biscuit cut.

For the numbers, I had some vinyl numbers cut by Teresa at Custom Vinyl Signs (she’s always so helpful with these projects of mine), and it’s here I ran into one of the hardest parts of the project: what score to put on there.  It needed be plausible and look good, but I thought it should still have some meaning.  I ended up using the month of my wife’s birthday, the day of our son’s birthday, and the month of my birthday.  If I were playing, I’d be pretty happy with 320 points in 5 balls.

The front panel is a sandwich of materials in this order:

The numbers are stuck to the frosted plexi, so that there’s no risk of them pulling off the marquee’s printing if I ever take this apart to re-do it.  The idea behind the frosted plexi was to disperse the backlight evenly, but the lights ended up being so bright and so close in the frame that you can still see where the actual tubes are through the score numbers.  This is visible in the big picture at the top.  There’s also still some light transmission even where I painted over the scratches, due to the brightness of the lamps.

The corners were glued up with the front-panel sandwiched in place in the groove, and the whole thing held sturdy with biscuit joints. I used nylon ratcheting straps to pull everything together while it dried.

Now, to light it.  I started with three 12″ fluorescent lamps, but that ended up being complete overkill and didn’t light evenly, so I went with two 18″ instead.  They’re mounted on their sides — as they would be in the under-counter role for which they were intended — to a removable panel that screws into the back of the frame.  As mentioned a couple of paragraphs up, it’s not completely even lighting, but good enough. 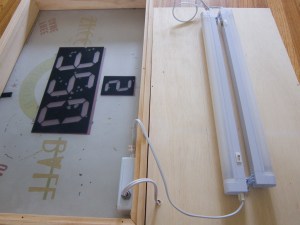 A good view of the numbers and the lighting.

The lights are wired to a junction box mounted to the inside of the frame, and from there a lamp cord runs through a hole in the back panel and to the outlet.  I added an inline switch to the cord to make it easy to turn off and on. 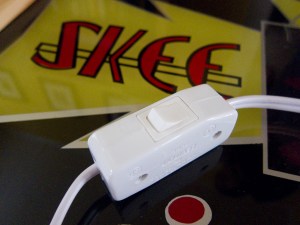 The switch on the power cord.

Once everything was wired up, it was time for a lighting test.  It’s good to make sure everything works before it gets sealed up. 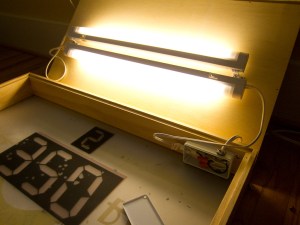 Let there be light!

Now if we only had a game room to keep this in.  For now, a place of honor on the living room bookshelf. 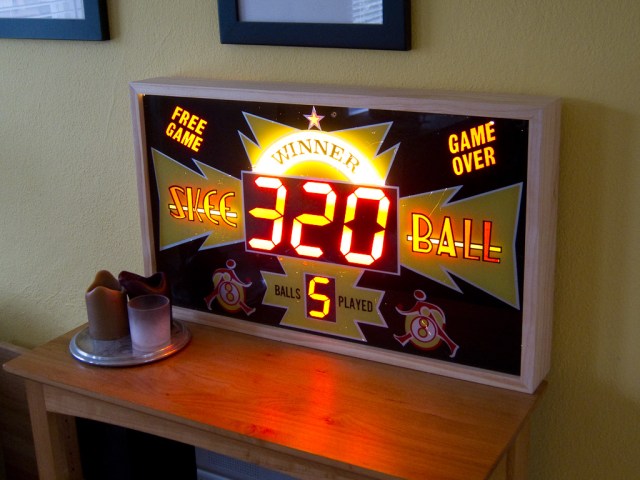